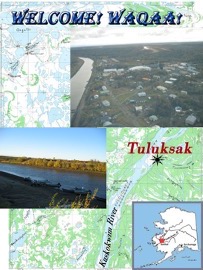 The Tuluksak Project Jukebox was designed in collaboration with students and teachers of Tuulkessaaq (Tuluksak School) and Freda Alexie (Yupiit Elitnaurutait Local Cultural Coordinator). High school students Kristy Peter and Richard Phillip traveled to Fairbanks with Robin Sullivan, a teacher from Tuluksak to work with the Oral History Program at the University of Alaska Fairbanks for this project. 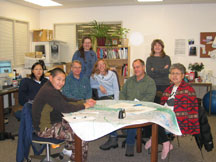 Interviews, maps and photographs were gathered for the jukebox from March 2004 to May 2005. All the base maps in this project were compiled by Robert Drozda and Vernon Chimegalrea from information provided by Lower Kuskokwim Yup’ik elders in 1988 (AHP CPSU and ANCSA 14(h)(1) Historical and Cemetery Sites Collection, ANCSA Project, at the Bureau of Indian Affairs Office, Anchorage, Alaska).

The Yupiit School District formed by the Yup'ik villages of Akiachak, Akiak, and Tuluksak, designed a program in 1999 for cultural heritage education, entitled Yupiit Elitnaurutait (Cultural Teachings), whose central principle is "to strengthen and support Yup'ik identity of students through the Yupiit Piciyarait (Way of Life)." As part of that program, Yupiit Elitnaurutait staff members collaborated with the Oral History Program at the University of Alaska Fairbanks to create the Akiachak, Akiak and Tuluksak Project Jukeboxes to bring together Yup'ik oral history, traditional knowledge, and historical documentation.

The Tuluksak project was funded by the Yupiit School District & U.S.D.O.E. O.E.S.E. C.F.D.A #84.356A and Alaska Native Education Grant #S56A030068 & T290U010503. The original Tuluksak Project Jukebox was completed in 2005, and in 2021 it was upgraded from its original HTML format to Drupal. The information in this project reflects the context of the original creation date. Some information may now be out of date. 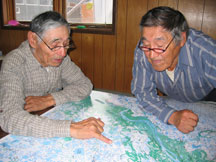