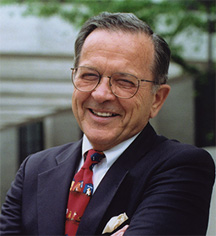 This project contains oral history interviews about Ted Stevens (1923-2010), who served as Alaska's United States Senator from 1968-2009. It contains an interview conducted with Senator Stevens in 1987 by John Whitehead, and interviews with some of Senator Stevens' professional colleagues and former employees conducted by Charles Fedullo and Paul McCarthy in 2009 and by Mary Anne Hamblen and Karen Brewster in 2011.

The Ted Stevens Project Jukebox was created in 2012 with funding from the Ted Stevens Papers Project at the Alaska and Polar Regions Collections and Archives, Elmer. E. Rasmuson Library, University of Alaska Fairbanks, which is funded by a grant from British Petroleum, Inc. and the Pollock Conservation Council. This Jukebox was created by Karen Brewster and Marla Statscewich of the Project Jukebox office at Rasmuson Library. The information in this project reflects the context of the original creation date. Some information may now be out of date.