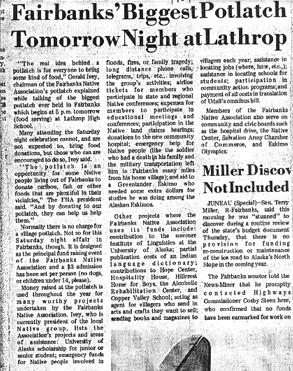 « Back to galleryItem 4 of 4« Previous
Description:

"'The real idea behind a potlatch is for everyone to bring some kind of food,' Gerald Ivey, chairman of the Fairbanks Native Association's potlatch explained while talking of the biggest potlatch ever held in Fairbanks which begins at 5 p.m. tomorrow (food serving) at Lathrop High School.

Many attending the Saturday night celebration cannot, and are not expected to, bring food donations, but those who can are encouraged to do so, Ivey said.

'The potlatch is an opportunity for some Native people living out of Fairbanks to donate caribou, fish or other foods that are plentiful in their vicinities,' the FNA president said. 'And by donating to our potlatch, they can help us help them.'

Normally there is no charge for a village potlatch. Not so for this Saturday night affair in Fairbanks, though. It is designed as the principal fund raising event of the Fairbanks Native Association and a $3 admission has been set per person (no dogs, or children under 14 please).

Money raised at the potlatch is used throughout the year for many worthy projects undertaken by the Fairbanks Native Association. Ivey, who is currently president of the local group, lists the Association's projects and areas of assistance: University of Alaska scholarship for junior or senior student; emergency funds for Native people involved in floods, fires or family tragedy; long distance phone calls; telegrams, trips, etc involving the group's activities; airline tickets for members who participate in state and regional Native conferences; expenses for members to participate in educational meetings and conferences; participation in the Native land claims hearings; donations to the new community hospital; emergency help for Native people (like the soldier who had a death in his family and the military transportation left him in Fairbanks many miles from his home village); and aid to a Greenlander Eskimo who needed some extra dollars for studies he was doing among the Alaskan Eskimos.

Other projects where the Fairbanks Native Association uses its funds include: contribution to the summer Institute of Linguistics at the University of Alaska; partial publication costs of an Indian language dictionary; contributions to Hope Center, Hospitality House, Hillcrest Home for Boys, the Alcoholic Rehabilitation Center, and Copper Valley School; acting as agent for villagers who send in arts and crafts they want to sell; sending books and magazines to villagers each year; assistance in locating jobs; assistance in locating schools for students; participation in community action programs; and payment of all costs in translation of Udall's omnibus bill.

Members of the Fairbanks Native Association also serve on community and civic boards such as the hospital drive, the Native Center, Salvation Army Chamber of Commerce, and Eskimo Olympics."