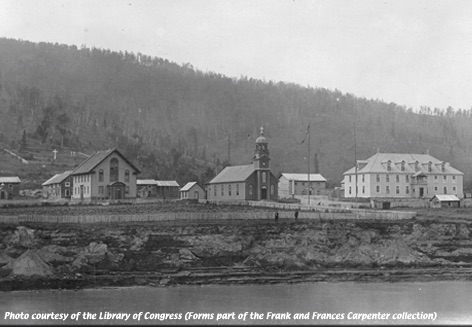 The Holy Cross Community Project Jukebox provides a snapshot of the lives of some of the elders from the village of Holy Cross, Alaska, which is located among small rolling hills, adjacent to the Yukon River, in Western Alaska. Holy Cross is home to approximately 200 people (2000 U.S. Census), predominantly Athabascan Indians and Yupik Eskimos. Once established as a Catholic mission in the 1880's, children from across Alaska were educated in the Catholic religion, math, reading, and writing, and were taught the value of hard work through daily chores, wood working, sewing, beading, cooking, and gardening. Village residents also worked hard to provide for their families, with men spending winters on traplines to exchange furs for groceries or by selling cords of wood to the mission or river steamboats, and families fishing together all summer to harvest and store salmon for later use. Although people must now rely on the monetary system in order to provide for their basic needs, they still live close to the land.

In 2001, Debbie Turner originated the idea for this project as a practicum for her Human Services Degree at the University of Alaska Fairbanks. Debbie was born and raised in Holy Cross and, at the time, was the Tribal Family and Youth Specialist for the Holy Cross Tribal Council. With the village losing more and more of its treasured elders, the Holy Cross Tribal Council agreed that it was important to preserve the knowledge and stories of their last remaining elders and funded the project. Debbie worked in coordination with a committee to come up with a list of people to be interviewed. Family members helped plan and conduct the interviews, and the elders selected photographs from their own collections to demonstrate particular aspects of their lives. The historic film clip included in the Jukebox is from the Alaska Film Archives, Rasmuson Library, University of Alaska Fairbanks. The footage of Maurice Newman running his dogteam and checking his fishtrap was taken in the late 1950s by the Alaska Department of Health and Welfare, Alaska Sanitation Aides, Hotspot Team (Film# AAF384).

Debbie also worked with the University of Alaska Fairbanks Oral History Program to plan and design this Jukebox, to arrange and conduct interviews, and to make the program available in Holy Cross. Other interviewers from Holy Cross included Eugene Paul, Tessie Paul, Carol Atkins, and Rita Paul. Karen Brewster, Research Associate with the Oral History Program collaborated on the planning, design and interviewing. Bill Burke and Cal White, Research Technicians with the Oral History Program, worked in 2002 on putting together the pieces to create the Jukebox. The final Holy Cross Community Project Jukebox was completed in 2004, and in 2021 it was upgraded from its original HTML format to Drupal. The information in this project reflects the context of the original creation date. Some information may now be out of date.