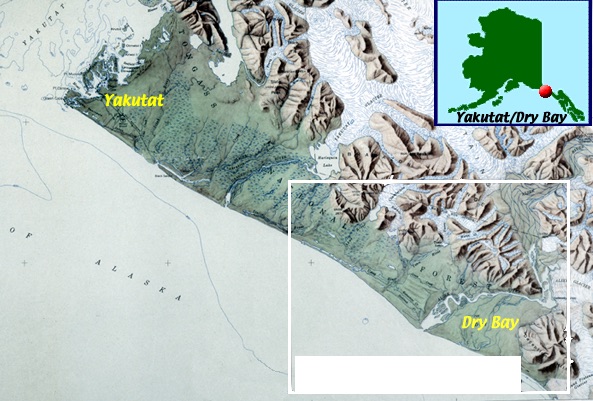 Dry Bay is located in northern Southeast Alaska where the Alsek River flows into the Gulf of Alaska. It is the place of origin of several Tlingit clans: the Shungukeidi, an Eagle clan with the Thunderbird crest, whose legends have their roots along the Alsek River; and the Luknaxadi clan, the Raven Coho people who built six houses at Gus'eix.

By the time this project began in 1996, it had been nearly 75 years since the Gunaxoo Kwaan had lived as a community at Dry Bay. Changing times and economic forces dispersed the clans, with many people settling in Yakutat. Over the years, many Dry Bay people returned seasonally to fish, hunt, and trap, and kept alive their connection to this place. These people formed the core of this project. Much of the Dry Bay Project Jukebox relates to two field trips to Gunaxoo: in 1997 to search for the former village on Cannery Creek and for Dine'lgi.aan (Shaking Village); and in 1998 to search for the lost village of Gus'eix. The project also inspired people to gather to share information during the Sealaska Celebration in Juneau in 1998 and in Yakutat later that same year. Much of that information has been condensed into the place name maps. Eventually, members of the Gunaxoo Kwaan began to gather as a group in Yakutat, and one of those gatherings is presented in its entirety. There is much discussion about the place of Dry Bay, and also of the ancestors who lived there

and how they are related to the Dry Bay people today. Ultimately, this program is a record of the Gunaxoo Kwaan as it exists at the end of the 20th century, its memories of past events and peoples, and their powerful connection to this very special place.

The Dry Bay Project Jukebox was a collaborative effort between the traditional clans of Dry Bay (Gunaxoo), the National Park Service (NPS), the National Forest Service (NFS) and the Oral History Program at the University of Alaska Fairbanks. The project was funded by the NPS, which currently manages a large portion of the traditional territory of the Gunaxoo Kwaan, from Lituya Bay through Glacier Bay National Preserve to the Alsek River. Traditional lands north of the Alsek River to the Italio River are administered by the Tongass National Forest, which provided transportation, professional expertise, and access to many important places. The photos in this project were taken by Wayne Howell, unless otherwise noted. In 2020, the Dry Bay Project Jukebox was upgraded from its original HTML format to Drupal. The information in this project reflects the context of the original creation date. Some information may now be out of date.