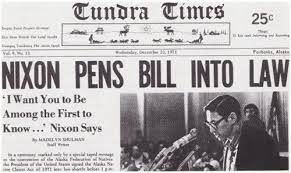 Honoring the Founders: Alaska Native Claims Settlement Act Project Jukebox was created in recognition of the 50th anniversary of the signing of the Alaska Native Claims Settlement Act (ANCSA) on December 18, 1971. This landmark legislation transferred 44 million acres of land from the federal government to newly formed Alaska Native regional and village corporations, and provided $962.5 million in compensation for lost land. It was the largest settlement of Native land claims in American history and transformed the social, political and economic landscape of Alaska, including with the influence of Native regional corporations, improvements to life in rural villages, management of land and subsistence, tribal sovereignty, and development of Native leadership. Not everyone supported ANCSA; it extinguished Aboriginal title to the land and Aboriginal hunting and fishing rights, thereby restricting Native control over land and subsistence.

The Alaska Native Claims Settlement Act Project Jukebox emphasizes the recollections of people who are important to the Native land claims movement, and is an opportunity to recognize those who worked to bring about this settlement, to assess the legislation that was created, and to evaluate impacts fifty years later. The story of ANCSA has been written in many published works, however, hearing from the people in their own words about their struggles, their successes, and what actually happened offers a richer and more personal experience. By listening to these first-hand accounts, students of land claims can better understand what their leaders went through to build a better world. 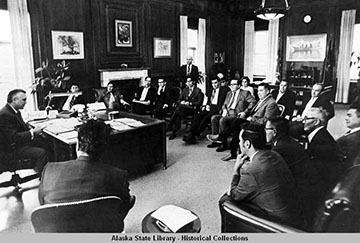 In 2022, the Alaska Historical Society produced the "Guide to Sources for the Study of the Alaska Native Claims Settlement Act" that contains information about primary source archival resources on ANCSA available from archives around the state and nationally (Volume 1 includes an essay on the history of ANCSA, a timeline, a list of key participants in the land claims movement, and an inventory of major collections; Volume 2 is an annotated bibliography of published and unpublished sources of information about the act; and Volume 3 presents educational resources for the teaching of ANCSA). The guide includes descriptions of manuscript and photograph collections, oral histories, historic film, media productions, and online materials.

The Alaska Native Claims Settlement Act Project Jukebox was created in 2022 by Karen Brewster of the Oral History Program at the University of Alaska Fairbanks. Funding was provided by the Alaska State Library through an Interlibrary Cooperation Grant based on American Rescue Plan Act (ARPA) funds. The information in this project reflects the context of the original creation date. Some information may become out of date.