Return to Akiachak - Then and Now 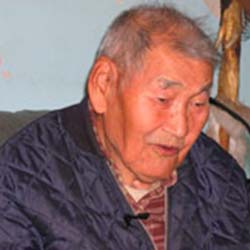 Video clip (1:39 min) of Joshua Acurunaq Phillip speaking in Yup'ik about the early history and village migrations of Nunapiarmiut and Qikertarmiut that led to the settlement of Akiacuar (Akiachak) in Akiachak, Alaska, no date. Video courtesy of the Yupiit School District,Yupiit Elitnaurutait Collection. Produced by Frank Chingliak of the Yupiit School District, 2005. English summary by Frank Chingliak of what Joshua says in this video: There was one house that belonged to a person originally from a Yukon River village of Iquk (Russian Mission). The residents of Qikertarmuit called the one house "Akiacuaq." There was just one house and they called it 'Akiacuaq.' The one house that residents of Qikertarmuit called Akiacuaq, eventually grew in number of people. The one house that the people named 'Akiacuaq' had only two residents, which was the married couple. People would say, "I am going across to the couple of Akiacuaq." Eventually, this became Akiachak. A couple that moved to this side of the slough from Qikertarmuit started it, all because of one house.

Video clip (3:27 min) of George Ayaginaar Moses, Sr. speaking in Yup'ik about how to survive in open water conditions in Akiachak, Alaska, no date. Video courtesy of the Yupiit School District, Yupiit Elitnaurutait Collection. Produced by Frank Chingliak of the Yupiit School District, 2005. English summary by Frank Chingliak of what George says in this video: When accidents in the river were becoming rampant, we were advised of certain survival techniques. If you were to come upon open water by snow machine, river currents are always down stream, please listen very carefully, if you come upon open water without notice. Let's say that you fall into open water in the river. Your snow machine falls in up stream and you begin to float down stream. Because of your natural instinct to survive, you want to bring yourself out of this predicament. If you float down stream and find yourself on the edge of the river ice, you boys please play very close attention to what I have to say. If you float down stream and reach the edge of the ice, keep in mind to place your arms on top of the ice. Once you place your arms on top of the ice, the river current will allow your legs to swing down stream. Once your legs begin to swing down stream, roll your whole body toward the top of the ice. The momentum of the current with the help of your arm will normally allow your body to roll on top of the ice. Do you understand? If you keep that in mind, do what I just advised. Roll your body with the current onto the top of the ice. If you do it correctly, it will bring you out of the water. Once you fall into the water, please keep in mind the advice that was taught to you. My advice to you about how you can save yourself is an advice. It isn't mine; I'm passing on to you what was advised to me by the Elders. This was a technique that has proven to draw a person out of the currents of open water. Before the pressure of the current releases your arm from the top of the ice, you are to roll with the current onto the top of the ice. You are to release the arm that is against the current and apply pressure on the arm down current and roll. I've had to deal with this situation more than once. If you do not apply these procedures in this situation properly, you will most likely perish. But if you heed to your advices and remember the proper procedures, your chances of pulling yourself out of the water will be better. When you find yourself in circumstances such as this, it is better to keep alert with a sound mind. Some situations result in tragic endings. If you find yourselves in these kinds of situations, death is imminent. 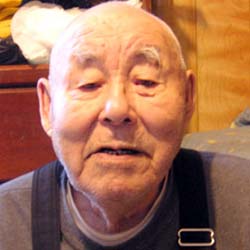 Video clip (3:41 min) of James Qukailnguq Peter, Sr. speaking in Yup'ik about obedience, respect and family roles in Akiachak, Alaska, no date. Video (#DV061-04) courtesy of the Yupiit School District, Yupiit Elitnaurutait Collection. Produced by Frank Chingliak of the Yupiit School District, 2005. English summary by Frank Chingliak of what James says in this video: If your teacher, mother or father, older sister or brother, asks you to do something, without hesitating stand up and oblige. To procrastinate is a tool that the evil one uses. That is why we would like for you, our children and children's children, have not experienced what we experienced in the past. It seems that you are growing up on your own. Our mothers have authority over us; our fathers and grandparents have authority over us. As you see me now, my forefathers' advices to me are still alive. Now, I am a grandparent. Both my parents are gone, I stand alone. You probably think that things will never change and will remain the same. I too thought as a child that I would always be with my parents. I thought that I would be able to do things on my own and be my own boss. A mother's position plays a significant role in parenthood. A father's role is also important, but his role is to provide food for the family. A mother's role is to cook for the family, keeping the family nourished at all times. Those are some of the important things you have to realize. Laziness, bullying or not getting along or fighting with others, is not be tolerated. If you disrespect your teachers, you are disrespecting your parents as well. If you do not follow your teachers' instructions or when they ask for you to keep quiet, heed their advice. The teachers are working very hard so that you will learn. Their role is just as important as honoring your mother. If you don't pay attention in your classroom to your teachers' instructions, you will not learn anything. And also, if you rough house and engage in mischievousness, your chances to learn anything will diminish. Your chance to learn anything is gone if all you do is horse around. Good and sound advice derives out of love. I love and care for all of you as much as I love and care for my own body. If I didn't care for you, I wouldn't waste my time to come here and talk to you all. But because of the importance of love, I am here.

Video clip (2:49 min) of Frederick T. Sualpi George speaking in Yup'ik about celestial navigation to Annie Kinegak's class at the Akiachak school in Akiachak, Alaska, April 2002. Videotaped by Mildred Evan with assistance from Sophie Kasayulie. Video courtesy of the Yupiit School District, Yupiit Elitnaurutait Collection. Produced by Frank Chingliak of the Yupiit School District, 2005. English summary by Frank Chingliak of what Frederick says in this video: What month is this going to be? The month is November on the chart. It's precisely on the tenth day of November during the fall. The chart is effective up until March. I am only familiar with the time period between the months of November until March. The months that have more daylight are hard to distinguish because the stars aren't visible. Navigation can also be accessed with the computer. These are the only months that I am knowledgeable of, November, December, January, February and March. The trails that I often travel on, I am more knowledgeable with. So, I am only familiar with the months between November and March. Yesterday, the stars were almost visible. Also Tunturyuq (The Big Dipper) was barely visible. But, today it is cloudy outside. If you could make it a habit to observe weather patterns when you go out of doors, it will be helpful for you. When is the wind direction from today? By feeling the wind on your face, which direction is it coming from? Remember yesterday I mentioned that the wind direction was from the southeasterly direction. These months between November and March are the only months that I know of. You will find out where you are. You will know the general area where you are. 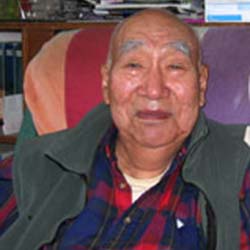 Video clip (3:00 min) of Joseph Uyaquq Lomack speaking in Yup'ik about being the first Community Health Aide in Akiachak, no date. Video courtesy of the Yupiit School District, Yupiit Elitnaurutait Collection. Produced by Frank Chingliak of the Yupiit School District, 2005. English summary by Frank Chingliak of what Joseph says in this video clip: My name is Joseph Lomack, I am originally from Akiachak and I was born here as well. My Yupik name is Uyaquq. I worked as a Health Aide while I was working in the school. I wasn't familiar with some of the proper procedures to contact hospital personnel. I communicated to the hospital with Northern Lights Communication ham radio. Before my hearing was impaired, I was able to detect broken legs with my ears. When there was a broken bone I was able to hear the grinding and creaking of broken bones. Doctors were amazed at my ability to correctly diagnose broken bones that was before my hearing loss. And also I improvised as a 'traditional stethoscope' a piece of wood that was about a foot long, with both ends wrapped with a piece of cloth. I would place one end on my other ear and listen to their chest. When there was a person with staging tuberculosis, there would be rattling sounds. But, a person with fully developed tuberculosis would complain of itching throat and constantly coughing. Another modern form was the conventional TB testing method. An instance while working as a health aide, I was so busy that I didn't have time to eat, and sometimes I didn't have time to eat anything all day tending to the patients. This was during the diphtheria epidemic. People were contracting the disease and succumbing to the illness the next day. If I had known what to do then, I would have taken the appropriate action. An Elder asked me if I knew what to do when the diphtheria epidemic happened. He asked me if I knew what I was supposed to do, I said I didn't know at the time. He said if I had the patients open their mouths and cut a small slit on their tonsils, they would have restored health. Many regained their health. 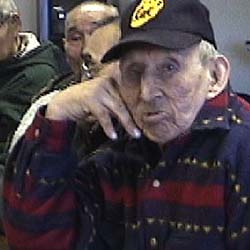